Few people have a record as consistent as West Midlands ace Dave Brown, he has an outstanding list of achievements on both commercial fisheries and natural venues alike with a particular proclivity towards canals. To discover how and why Dave is so successful on these towpath lined venues we spent a day on the bank with the man himself in the hope he would enlighten us with the tips and tricks he employs to reap the rewards from these fantastic venues. First of all, lets run through a general approach to tackling these tricky venues. Dave has a number of golden rules that he follows for his shallow canal approach. An important starting point is where in the peg to focus your attention. This vital decision can be the difference between bagging up or even blanking! If your peg has a feature such as a boat or reedbed then these would instantly be in Dave’s thoughts as key areas of focus. Fish in these often-hectic waterways treat these areas as a safe haven, out of the way of boat traffic and often predators. You are also likely to catch larger bonus fish in these areas, species such as perch, chub and even carp are not uncommon, and your tackle needs to reflect that (more of that later). The second area of the canal to target according to Dave is “down the middle.” This area of the canal is usually the deepest part of the swim due to being the main channel in which boats pass. With this extra depth you can often be a little more positive with the feed as you are likely to encounter a multitude of species all of which are likely to snaffle your bait, anything from tiny gudgeon to big skimmers and bream! The third option is towards the far bank. This area is often fished on the first shelf of the canal where Dave can find between 2-3ft of water. This is a natural fish holding area, especially for smaller fish such as roach and smaller skimmers. In addition, a line not often used in Dave’s attack but also one he is only too aware not to discount altogether is down the edge. On narrow canals it is often the case that the banks are lined with ‘tins’ and it’s in the nooks and crannies along the inside bank, often right under your feet that you can often winkle a few perch and gudgeon out. This is rarely a match winning tactic but will often produce a pound or more of small fish which can make all of the difference on particularly difficult days. 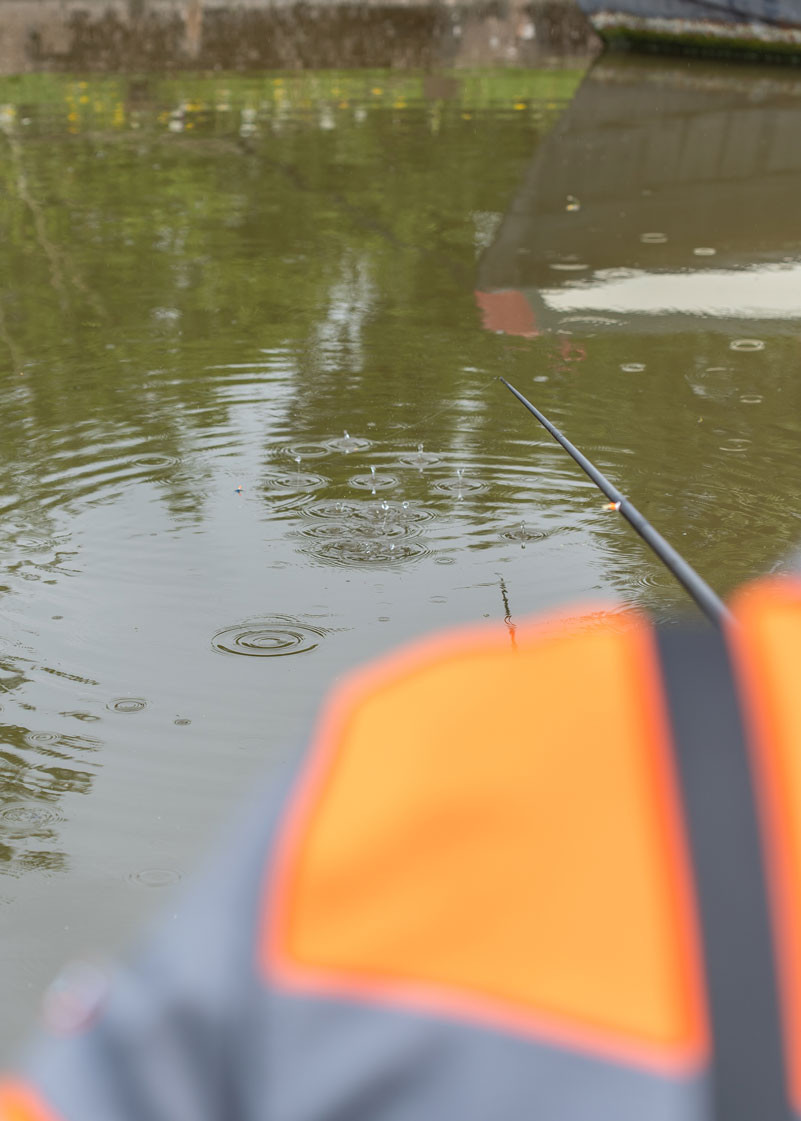 Dave is an incredibly positive angler who really likes to attack the swim and his list of bait reflects that. Squats, pinkies, caster and hemp are his chosen baits along with a bag each of Sonubaits Black Roach and Black Lake ground bait. Dave’s approach is pretty simple, casters are for down the middle or against a feature where a better stamp of fish can be targeted. A hemp line along the far shelf (usually slightly out the way of his main swims) and a squat and ground bait approach is deployed along the far shelf where that optimum 2-3ft can be found. The caster line is primarily fished during the later stages of the match as this is when the larger roach or bonus fish are likely to be caught, regular loose feeding is the key for this line as the fish like to see a regular column of bait falling through the water. An occasional visit may be made earlier in the session just in case it is going to be a real red letter day but in normal circumstances the last hour or 90minutes prove most fruitful. The groundbait and squat line is what Dave calls the “bread and butter” line where he will look to amass the bulk of his fish throughout the day. Anything from four to eight balls of ground bait are fed at the start of the session, either cupped or thrown depending on how good he believes the session will be – use your expected target weight as a guide. Loosefeeding then keeps the peg topped up as well as helping to draw more fish into the area. Squats are the go-to choice for this style of canal fishing but pinkies can also prove effective, usually where a lot more skimmers or pommies are present rather than roach. This is always done via catapult as efficiency and accuracy are key to this style. Finally the hemp line, this area of the swim is fed regularly throughout the day with loose fed hemp not before  100ml of hemp is deposited into the peg at the start of the session which gives the fish somewhere to settle over while Dave creates a feeding zone with his loose fed bait. 10-20 grains are fired in every five minutes throughout the day like casters, hemp can often take a little while to get going, in fact it is rare that the first hour of a hemp line would produce at all! However, once roach get a taste for the seed then there is often no looking back such is the effectiveness of it. A single tin of Sonubaits Natural Hemp is enough to see Dave through a typical match or session with a few hook samples prepared on the side. 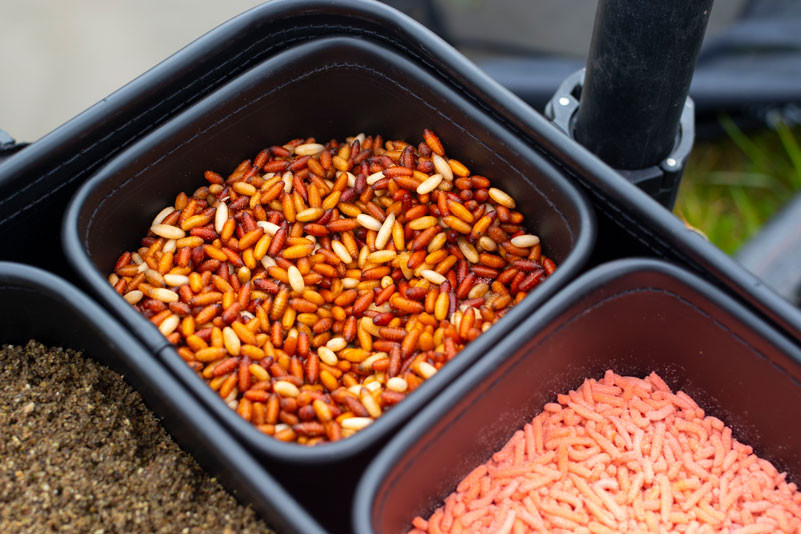 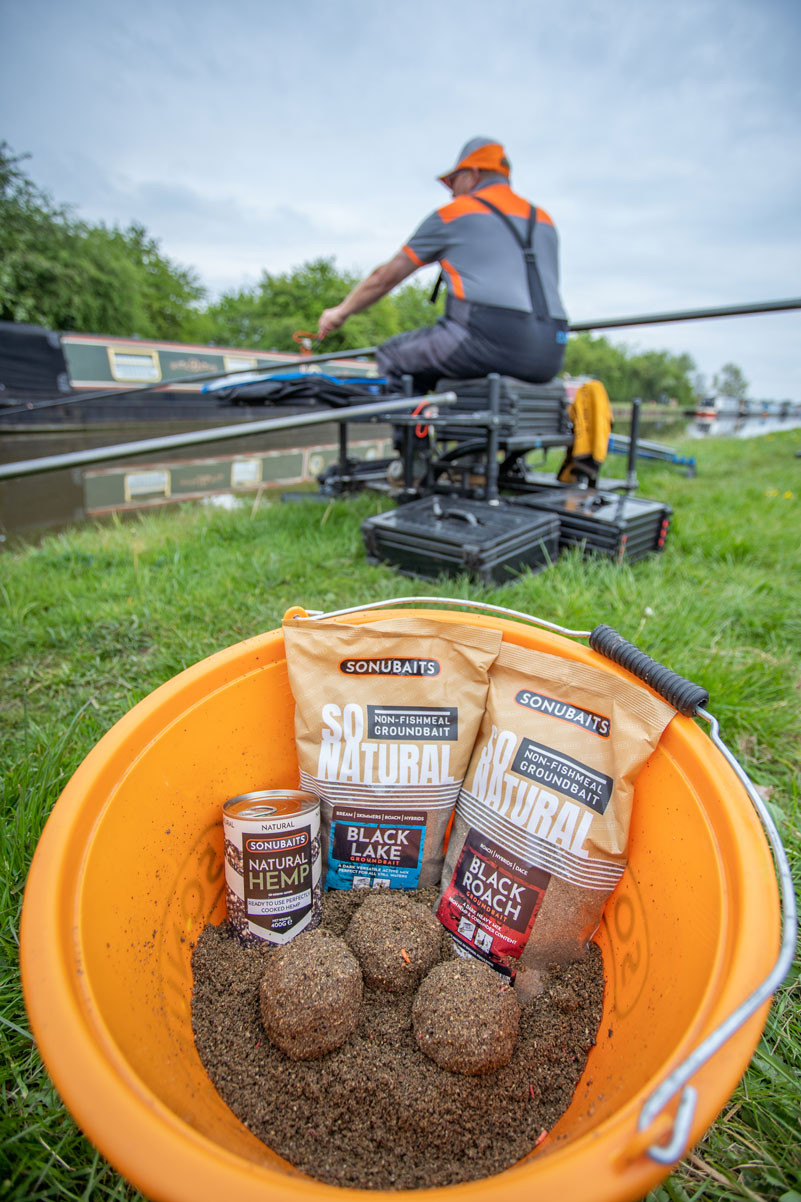 As with Dave’s bait his choice of tackle is incredibly simple! Firstly, let’s talk floats, Chiantis, Silvers and F1 Maggots all from Innovations are Dave’s choice of floats for pretty much everything. The Chianti is used for both casters and hemp, the slim body and cane tip allows you to see the shyest of bites and also offer plenty of stability. Next up is the Silver float which he uses on the squat line, this float differs slightly as it has a tapered tear drop body with a solid plastic 1mm tip. He prefers this shape as it offers a little more stability which is perfect as the far bank is often the area of the canal that catches the most wind and tow.

The last float is the Des Shipp Commercial Slim F1 Maggot float, this pattern has an 1.5mm hollow tip and carbon stem along with a slim body which Dave prefers to use on his caster line where he is targeting larger fish. The thicker hollow bristle offers great visibility and allows Dave to fish with bigger baits such as double caster or a chunk of worm. One thing worth noting is that Dave always opts for the lightest float that the conditions allow you to use in conjunction with a fairly stung out shotting pattern. 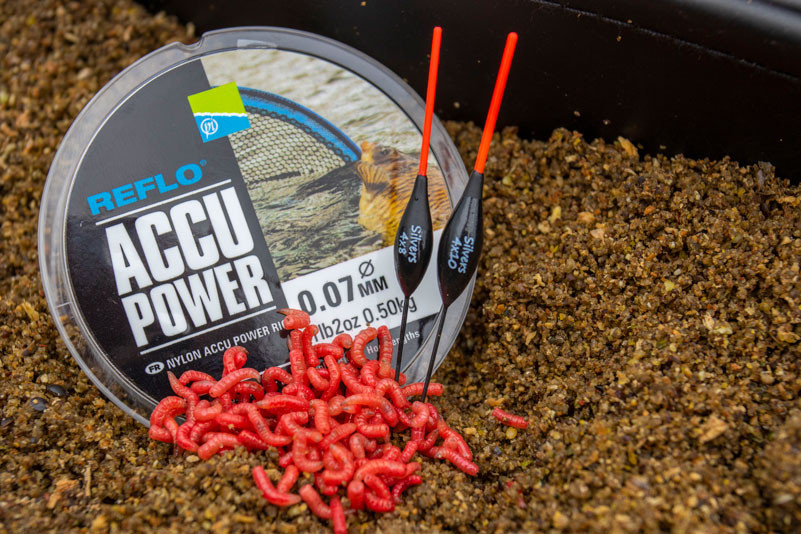 The next items of tackle on the list are hooks and line, again this is kept simple, Accupower in 0.12mm is the choice for the mainline on all rigs except the bonus fish rig which is tied to 0.18mm of the same material. Hooklengths are all 4in and are tied to 0.07mm Accupower and a minimum of 0.12mm on the bonus fish line. A point worth noting is that Dave isn’t scared to fish up to 0.18mm for larger fish, in fact if fishing up against snags then he would be inclined to fish that heavy with no second thought. 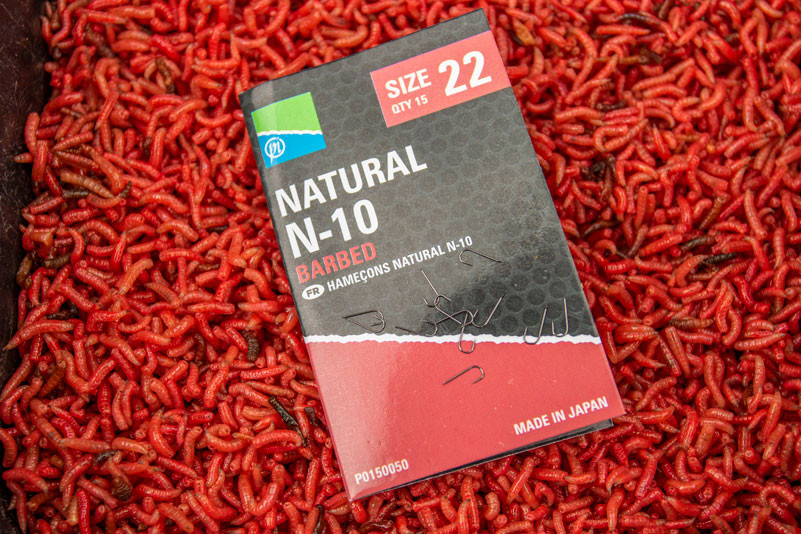 Hook choice is simple, N10s are the choice for both squats and casters in a size 22 and 18 respectively. However, the wide gape, squared shape of a N40 is better suited to hemp and is perfect for rolling the grain of hemp onto. The only change in hook choice would be when fishing against snags for larger fish, in this situation Dave prefers to step up to an N30. This has a wide gape and thicker wire than the previously mentioned hooks and is more suited to more demanding situations compared to their fine wire counterparts. As with the floats Dave always likes to opt for the smallest hooks he can get away with, this includes hooks as small as 22 with single squat hook-baits. The final item of tackle is elastic choice, number three and five Innovations Original Slip elastic are the choices for general caster, squat & hemp fish however he likes to use the more stretchy Hollo elastic on his bonus fish line, this can be anything from a 9H up to a 17H depending on what peg he is faced with. Dave decided to take us to one of his favourite stretches of the Shropshire union canal in Soudley. This stretch contains a huge amount of roach and skimmers which means the main approach is a squat line with ground bait and a caster line down the middle. There are however odd pegs where bonus fish such as chub and big perch can be caught. Dave’s choice of peg had a moored boat which is an obvious fish holding area but, on this occasion, this became a squat line due to the depth and his believe that there will be a lack of bonus fish within the area. To kick start the swim Dave cupped in six balls of his 50/50 mix of Sonubaits Black Roach and Black Lake, this is mixed on the sticky side to help transport the generous offering of squats he had added to the mix to the bottom. He then fed 100ml of hemp on a line slightly to the right of the boat and begun to throw caster down the middle to kick that swim off.

After the initial feed the first line to look on was the squat line, it was amazing how quickly the fish had settled on the bait as Dave swiftly started putting fish in the net in double-quick time! It’s clear to see why he is such a threat on these venues as he quickly mustered a bag of small roach in no time in machine like fashion. After a number of hours plundering this line and firing two pints of squats in the process it was time to look on the caster line down the middle of the canal. 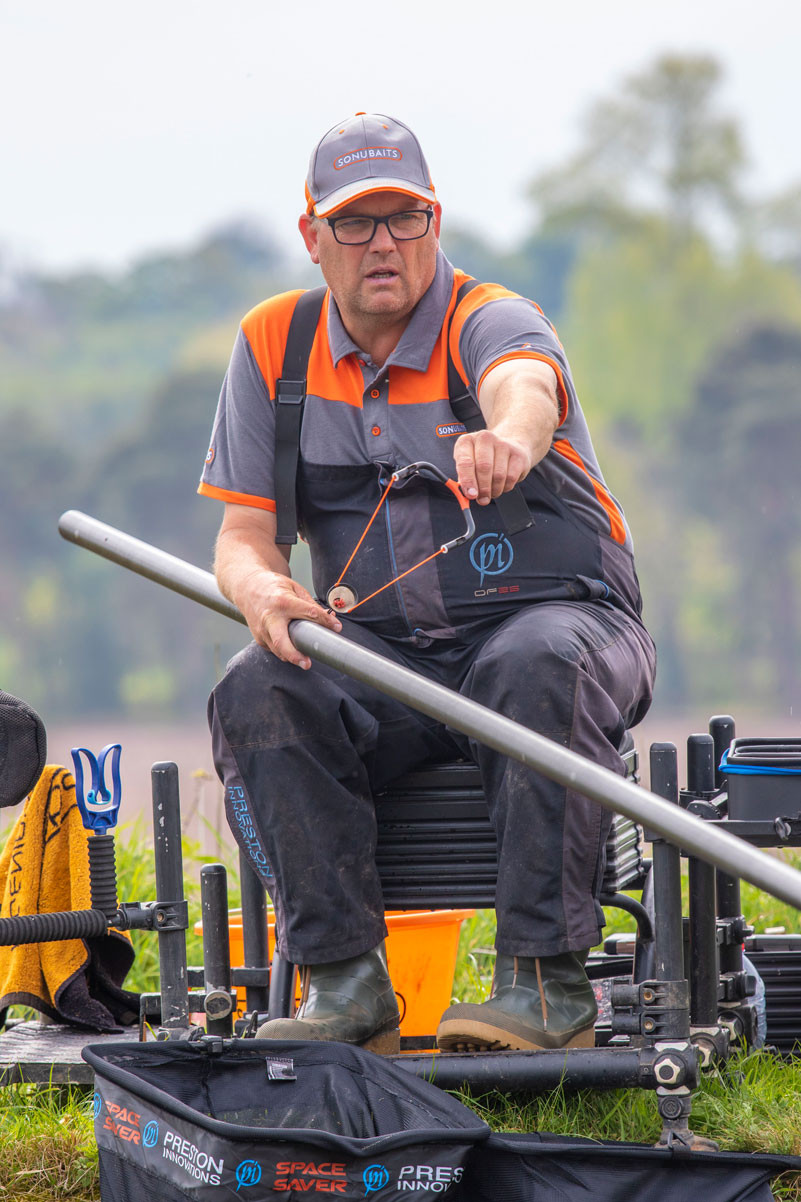 Dave had been priming this line with a regular stream of 8-10 casters and it was clear to see some better fish had settled in the area which included a number of better stamp skimmers. Although this line was steadily producing a few better stamped fish the number of boats promptly disturbed and coloured the canal which in turn saw the fish vanish. A quick top-up and a switch to back to his squat line saw another steady stream of small roach before the hemp line became the focus of Dave’s attentions. He had promised that the hemp line would hold the key to catching a decent weight today and he didn’t disappoint! Having been primed for the best part of three hours the fish had clearly settled and were in fine feeding form, a small grain of hemp slid around the N40 hook producing three or four fish before replacing and repeating the process. In a hectic last spell Dave put a dumpy roach in the net every drop to end the session. 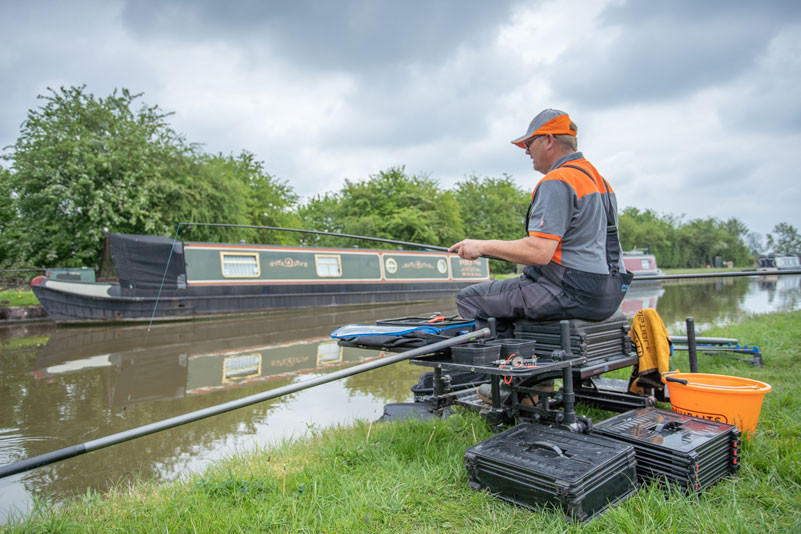 It’s safe to say that Dave is a true master of this style of fishing and you certainly wouldn’t want to draw next to him! The rate at which he caught fish especially on the squat line was frightening, yet although he was incredibly fast it was like watching poetry in motion as he repeated the process of feeding and shipping over and over again. This fantastic display saw Dave end up with around 16-18lb of small roach and the odd better skimmer and roach which would certainly have won him some money if it had been a match! 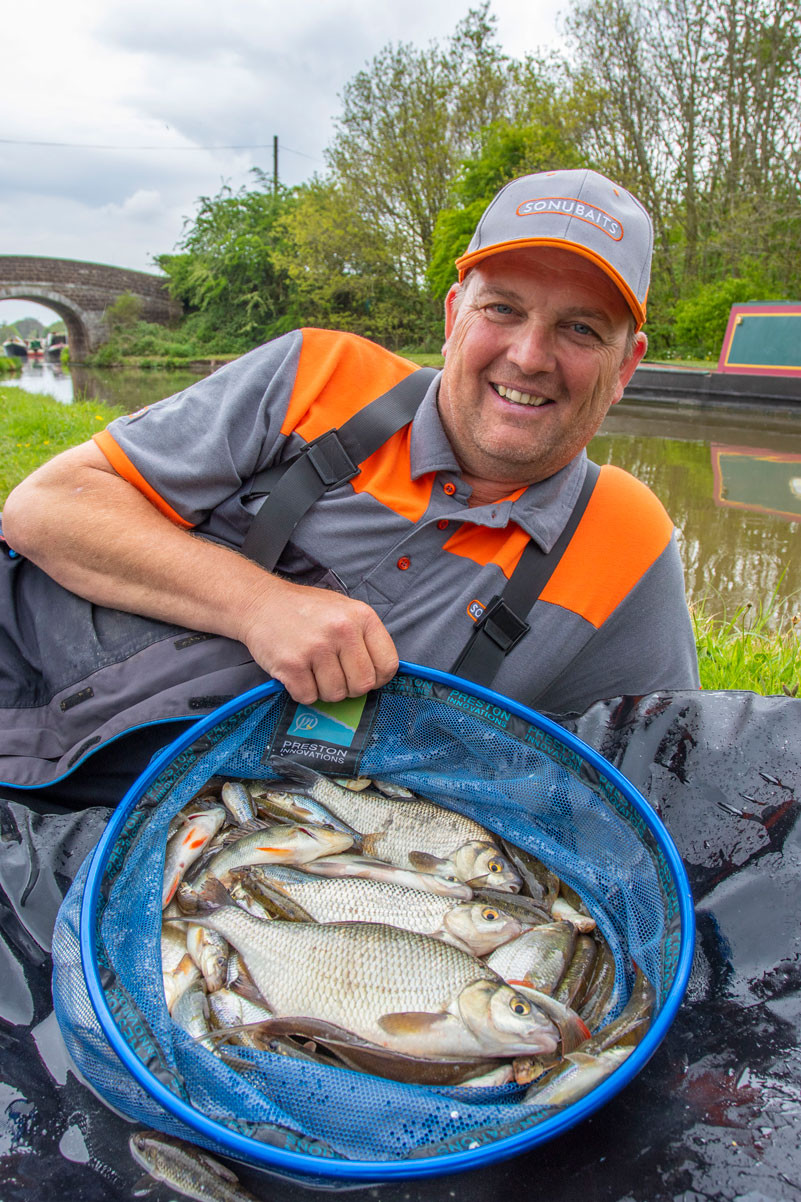