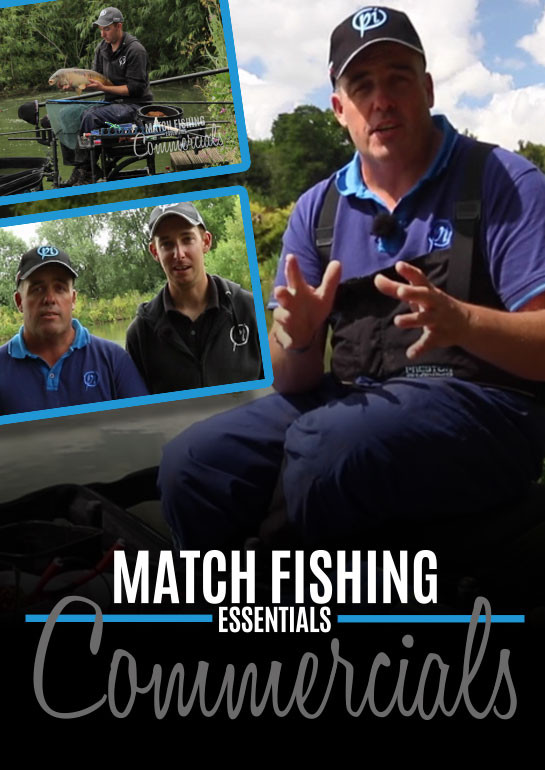 So, here’s the concept: We take two highly successful commercial Match Anglers, send them off to different commercial venues and get them each to go through their methods that they use to fish a match. It’s that simple.

Des is fishing at Hill View Lakes, Gloucestershire, while Andy is at Viaduct Fishery in Somerset – both prolific commercial match fishing venues. Each angler demonstrates how they use feeder, shallow, silvers and margin tactics to their advantage throughout a match.

We're going to show you four different ways to make you a better match angler – four essential methods that Des and Andy are demonstrating, to make you a better commercial angler. The first of which is the feeder. It's a great starting point. Whilst priming the other lines up and also putting a few early fish in your net. The second technique is shallow fishing. It's a great way of building a big weight really quickly, whether you're fishing for F1's or large carp. The third method is silverfish fishing. A lot of people just ignore the silverfish. In these commercials nowadays there's lots of quality skimmers, roach, big perch, and it's something that you might have to do mid-match if things don't quite work out. The fourth and final tactic is margin fishing. Des and Andy are going to show you two slightly different ways of approaching the margin, which could be the difference between finishing nowhere and winning the watch.

1: Interchange Feeder System
02:11 – Des shows us how to use the Dura Banjo to fish to an island feature, 11:54 – while Andy demonstrates the ‘bomb and pellet’ technique, loose feeding bait over the top. Both worthwhile techniques on any commercial match fishing venue.

2: Head into The Shallows
Next up 20:04 – Des’s tactic is to go shallow on the pole targeting F1’s and carp at Hillview, while at 34:03 – Andy utilises his trademark “mugging” technique – looking for cruising carp at Viaduct.

3: Going After Silver Fish
40:48 – For silvers, Des opts for chopped worm and casters on the short pole to catch a lot of silver fish mid-match, meanwhile 50:24 Andy shows that fishing pellets on the deck can be worthwhile, as he targets larger bream and tench towards the middle of the match.

4: Margin Carp Fishing
Finally at 01:00:14 – Des goes after carp in the margins – feeding heavy particles down the edge, while at 01:05:58 – Andy uses groundbait, dead maggots and worms to produce some huge margin carp. This technique is very proficient and wins many anglers many matches.

Des is fishing at Hill View Fishery: http://www.hillviewlakes.biz
Developed on the site of fields previously used to grow cauliflowers, Hillview Lakes offers a total of five acres of water on an eight acre site. Owner, Keith Hill, dug the first lakes, Moorhen and Heron, in 1990 and started work on Canals One and Two eight years later to cater for the increasing demand in match angling. He then dug Canals Three and Four in 2000.

Hillview Lakes now has nine well-equipped and spacious Scandanavian-style Log Cabins making it an appealing retreat for all who are looking to get away for a weekend, midweek break or holiday with their friends or family with the added bonus of fishing for the keen angler.

?The Viaduct Fisheries is one of the prettiest and most natural commercial fisheries in the country. With six well stocked lakes nestled in the beautiful Cary Valley.  Constructed in the early eighties, the complex is very mature, with great character.  This includes tree covered islands, lily beds, gullies and many marginal features. The fish stock is varied with many carp, including species to 28lbs; these are complemented with a healthy stock of 'silvers', a mix of bream, perch, tench, rudd and roach . Also present are large eels and the occasional chub.